Nobel prize in Physics of 2018 was awarded to two research areas that are acknowledged for their groundbreaking inventions in the field of laser physics. Arthur Ashkin (Bell LaboratoriesResearcher, 96), who invented ‘optical tweezers’ and applied it to research in biology, is one of the winners. Gérard Mourou (Professor of École Polytechnique, France) with his Ph.D. graduate, Donna Strickland (Professor of University of Waterloo, Canada) developed a technique that can generate high-intensity, ultra-short optical pulses and shared the other half of the Nobel Prize.

The two research areas phenomenally do not have a direct relationship. However, scientists in the field of optics are approving the decision to jointly award the three people with the Nobel Prize since the two technologies are vital in laser science.

Dr. Ashkin, who renewed the record of the Nobel Prizes by becoming the oldest laureate at age 96, developed laser tweezers. To be able to observe and study a tiny object, it is necessary to clasp the object with a tweezer, move it to an intended spot and hold it at the position. However, if the object is a cell, an extremely small particle with a size of a micrometer (a millionth of a meter), a molecule or an atom that is the basic constituent of matter, there are no tools that can get hold of them.

However, if a beam of light is focused on a small particle or a cell, it is possible to move it to a wanted position or fix it at a specific spot. Dr.Ashkin was the first person to propose this technology. He started publishing papers on this since 1970 and presented the final work in 1986. The principle slightly differs depending on whether the size of the particle to be observed is bigger or smaller than the wavelength of the laser beam. 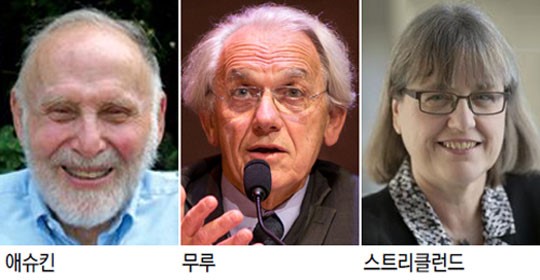 This technology, called with the name “optical tweezers”, has diverged into many different research areas. It has been utilized in various academic research such as observing a living cell while holding it in place or making it spin using a vortex-like laser beam. This technology also makes it possible to trap an atom and cool it to extremely low temperature to study the properties. Steven Chu, emeritus professor of Stanford University, won the Nobel Prize in Physics in 1997 with such research. Later on, Professor Steven Chu was selected by the president of the United States, Barack Obama, to serve as Secretary of Energy.

The first author of the paper in 1986 on the optical tweezers, was Dr. Ashkin and the last writer was professor Chu. Because of this, when Professor Chu received the Nobel Prize in 1997, the academics thought that Dr. Ashkin should have also been nominated. 21 years have passed since then, but the Nobel Prize committee must have had his exclusion on their mind. On the other hand, it also seems to be an adequate and timely decision to nominate Ashkin this year with the recent advancement in super-resolution optical microscopy and focused attention on optical tweezers.

Professor Mourou and Professor Strickland devised a technique called chirped pulse application (CPA) to create high-power lasers with high energy. Professor Strickland was a Ph.D. student at the University of Rochester under Professor Mourou when they published the paper together in 1985. To increase the power of pulses generated from a laser with amplifiers, the level of amplification is limited since intense light can damage the optical amplifier. The two people modified the technology used for radar and applied it to lasers.

It is possible to stretch out a pulse in time by using two grids to delay the short laser pulse according to wavelength components, and this decreases the intensity of light. When the light is amplified back with an amplifier and by using two grids again, it is compressed by time to make a high-power, ultra-short laser pulse. Because amplifying short pulses damages the amplifier, the idea is to stretch laser pulses into long and low-power pulses and then to amplify these modified pulses before compressing them in time to make short and powerful laser pulses.

This technology became the standard technique for making high-intensity laser pulses. Various research centers throughout the world these days use this technology to make high power laser pulses to study light-matter interaction. In the paper written in 1985 by Mourou and Strickland, the produced 2 picoseconds(ps. 1ps is one trillionth of a second) pulses could deliver only 1mJ of energy. Later developments took the duration to femto(fs. 1fs is one quadrillionth of a second) and atto(as. 1as is one quintillionth of a second) seconds and power to petawatts (PW. 1PW is a quadrillion times 1W.) This ultra-short high-power laser shed light on the physics of light-matter interaction. In particular, relatively much weaker lasers (still ultrafast, high-intensity) are now being used in eye surgeries such as LASIK. Both Mourou and Strickland have visited Korea in the past and Strickland made an effort to cooperate with Optical Society of Korea when she served as president of Optical Society of America (OSA).

Optics takes an important part in not only science but also our daily life. UN chose 2015 as the “International Year of Light” and UNESCO decided to celebrate May 16th every year as the “International Day of Light” starting from 2018. This day was chosen to commemorate the day when the American physicist Theodore Maiman invented the laser and operated it for the first time and to let the world know of the importance of optics and optical technology.

The field of optics is known to have produced numerous Nobel Prizes. For example, in 2009, the Nobel Prize in Physics was one half awarded to Charles Kao, former chancellor of the Chinese University of Hong Kong (CUHK), who opened the path to optical communication through research on optical fibers; the other half was jointly awarded to Bell Labs researchers Willard Boyle and George Smith for the invention of the color charge-coupled device (CCD) which is an image sensor used in digital cameras. Japan’s Meijo University professor Isamu Akasaki, Nagoya University professor Hiroshi Amano and the United States’ University of California, Santa Barbara (UC Santa Barbara) professor Shuji Nakamura received the Nobel Prize in Physics in 2014 for the invention of blue light-emitting diodes. The Nobel Prize in Chemistry of the same year was awarded to the scientists who developed super-resolved microscopy and last year’s Nobel Prize in Physics was given to scientists for their contributions to the observation of gravitational waves using laser interferometers.